At the beginning of the 20th century, Florina had seven mosques scattered all over the city to serve the religious needs of Muslims. The religious center of the city during the Ottoman period was the area enclosed by the streets of Alexander the Great in the north, Papakonstantinou Neretis to the southwest and Kresna to the east (Kaskamanidis, 2006: 50).

In this area, the Yakup Bey mosque, also known as Çarsi Cami (market mosque), was located north of the city’s weekly market (Cohen, 1920: 115. Kaskamanidis, 2006), as reported by the traveler Evliya Celebi , who visited Florina after the middle of the 17th century (Dimitriadis, 1973). 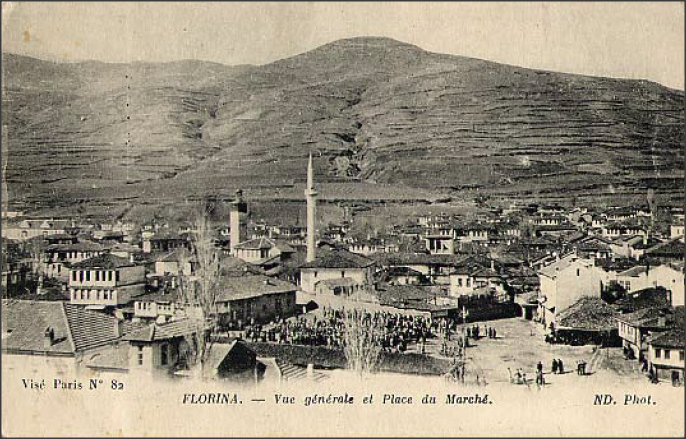 The building complex consisted of the mosque, the tekke of the dervishes belonging to the Naksibedi Battalion, the Abbot of the Sheikh Ali Dedde and the Teke’s Hostel, the Dervish Cemetery and the Mentrese (sacred school) (Meakis, 2003: 18- 32). This was at the same time a religious center and center of Muslim studies.

In this district there were many of the city’s commercial shops as well as the buildings of the Ottoman administration in its western section, which leads us to conclude that it is one of the oldest Muslim districts in the city, if not the oldest (Cohen, 1920 : 115. Kaskamanidis, 2006). 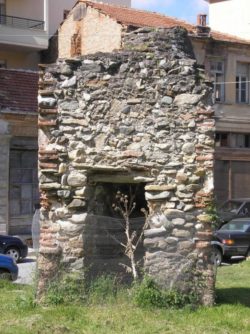 The mosque was a one-storey rectangular building and was covered with a simple four-sided roof and many openings with skylights on the top mainly towards the inner courtyard side on its eastern side. The base of the minaret, the only part of which is now visible, has a hexagonal plan. The mosque of the mosque had a height of more than 15 meters, was in the southwest of the mosque and was in contact with it (Cohen, 1920: 115. Kaskamanidis, 2006). The morphology of the mosque and the components of the minaret refer to a newer building of the 18th century. In 1953-1954 the mosque was demolished and only the lower part of the minaret of 380 cm was left.
Construction materials: 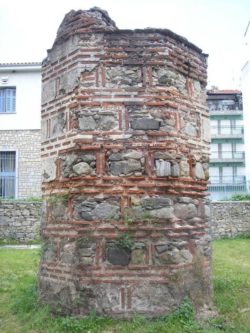 The mosque and the minaret were made of stone, they had paved floors and masonry made of river stones with strong mortar (courasani) as a binder, which was covered with plaster (lime mortar). Inside the minare there is a simple clay-masonry, while on the staircase there is a mixed building system with four rows of bricks and a stone slab at the foot of the staircase (Oikonomou, Papayannakis & Stoyos, 2013: 24-26).

Cohen, M. (1920). «Villes macédoniennes. Florina – Nevolani “, La Geographie, Vol. XXXIV, p. 115, as mentioned in: Kaskamanidis, I. (2006). The city and the districts of Florina during the Late Ottoman period. Department of Social Anthropology and History, University of the Aegean (unpublished thesis), p. 50.

Dimitriadis, B. (1973). Central and Western Macedonia, according to Evliya Celembi. Thessaloniki: Society of Macedonian Studies.

Kaskamanidis, I. (2006). The city and the districts of Florina during the Late Ottoman period. Department of Social Anthropology and History, University of the Aegean (unpublished diploma thesis).