Peiou’ building is a three-storey block of flats, located at the heart of the historic center of the city of Florina and counting at least one hundred and twenty-five years of life. It was built in the second half of the 19th century by the painter and wheatbird Ioannis Peio – Bogiatzis and, according to the owner, is the first Christian house in the surrounding area. 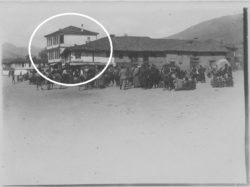 It is a rare example of the local architecture of the late Turkish occupation in Florina and presents an important architectural and folkloric example of a traditional bourgeois residence, considered to be preserved by Decree No 5022 / 2-2 1998 of the Minister of Macedonia of Thrace (Papayannakis, 2016).

The last level of the building was never completed, because the Ottomans banned its use because it was neighboring the Muslim district and the mosque of the market. The reason for this prohibition was only the location of the building, but also the height from which one could observe the Muslims in the inner courtyards of their houses (Oikonomou, Papagiannakis & Stoyos, 2013: 47-58).

Architectural features:
The premises of the building are structured on four levels above the ground and one below it (Papayannakis, 2016). 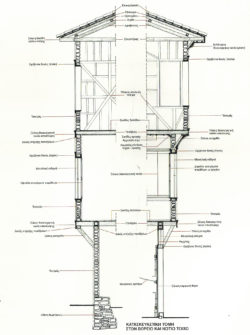 Courtyard: Access to the auxiliary areas of the courtyard, built to facilitate the professional activities of the family, is made by the door of the ground floor porch. Areas: Dye Building, Wheat Warehouse Building, Sanitary Ware.

Construction materials:
Building: stone in the basement and perimeter on the ground floor, while the rest of the walls are woodcuts (tsetsamades). 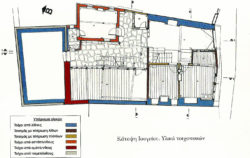 External wood-walled walls are filled with stone and mud, while the internal walls are made of oak bricks (unfinished bricks that have dried in the sun and the air). The floors are wooden. The ceilings are sometimes painted, sometimes wooden boards and sometimes the floors of the upper floor.

Roof: The roof of the building is simple four-story.

Wheat storage: Located on the east side of the building and consists of vertical wooden columns and horizontal planks.

Dye: Its masonry consists of baked bricks and its thickness varies between 20 – 60 cm.

Papayannakis, M. (2016). The Pei building at the heart of the historic center of Florina. Florina: Public Central Library of Florina “Vasiliki Pitoska”.